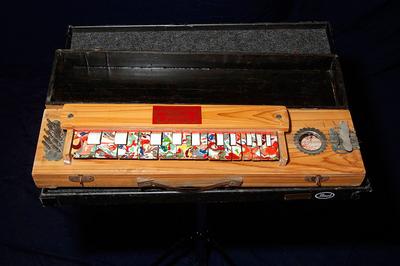 This Bulbul Tarang was bought by Emil Richards in Bombay, India in 1972 while on his honeymoon. Emil used the Bulbul Tarang on numerous soundtracks and other recordings, and was introduced to the instrument after using Ravi Shankar’s when recording the film, Charly, in 1968.

Similar to the Autoharp, a chord can be selected when a key is depressed, and the strings are often strummed with a pick.