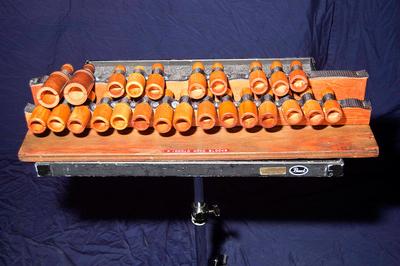 Emil Richards’ piccolo woodblocks are chromatically tuned and span a 2-octave range. He bought them from Pro Drum Shop in Hollywood in the 1970s, as the uniqueness of the instrument combined with the keyboard layout was appealing. Due to the diminutive size of these woodblocks, Emil often used small, hard mallets or even triangle beaters when playing them.

8va
15ma
This instrument is traditionally written for 2 octaves below where it actually sounds.