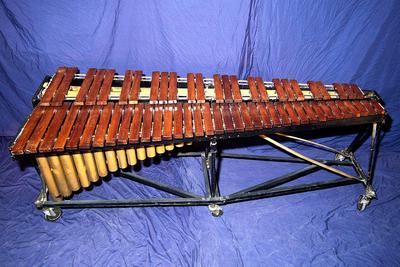 Emil Richards bought his xylorimba in 1960, which was his first instrument (in his now renowned collection), after moving to Los Angeles the year before. He bought the xylorimba from a percussionist who was on-staff at Paramount Pictures, but upon retirement.

This instrument had been used in the vaudeville era, when musicians would play as a soloist, running up and down this very large, 5-octave instrument. The xylorimba’s prodigious size and range allows for three musicians playing on it simultaneously with reasonable comfort.

In the studio, Emil would sometimes enhance xylophone parts by playing the passages on the xylorimba; because the instruments are similar in timbre, using xylorimba kept the continuity of sound. It was used on recordings by the Beach Boys, the Everly Brothers, Jan and Dean, and Burny Mattinson.